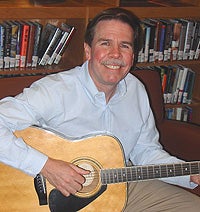 The CISG Song was written by Professor Harry Flechtner for CILE's November 2005 conference titled "The CISG and the Business Lawyer: The UNCITRAL Digest as a Contract Drafting Tool."

Professor Emeritus Harry Fletcher Sings the Blues for the Opening of the 27th Vis Moot!

Check out Professor Flechtner performing some of his greatest hits:

Watch Harry Flechtner and Ingeborg Schwenzer performing at the Vienna Concert Hall in 2017. Like Prof. Flechtner? Check out our LL.M. program

When I was a little boy my daddy said to me,
"If you want great riches, son, it's a merchant you should be.
You can deal in goods from cars to cod, and earn more than enough.
But don't buy or sell 'cross borders, son, cause that's awfully risky stuff."

We didn't have no C-I-S-G. [1]
If we bought or sold in another State we didn't know what the law would be.
But now there's a Convention to make global trade more free.
'Cept them gol-danged U.S. courts just treat it like the U-C-C. [2]

As a young man I took up those words my daddy said.
I became a merchant -- traded goods to earn my bread.
But I would not buy or sell beyond the borders of my State
'Cause if the deal was not domestic, none could tell my legal fate.

We didn't have no C-I-S-G.
We were clueless how the law would go if we dealt internationally.
But now under this treaty global commerce is a breeze,
'Cept some jerks from Pittsburgh and Denmark say I can't recover no attorney fees. [3]

So now there is a treaty when I buy or sell afar.
I can deal with folks from everywhere, from Arles [4] to Zanzibar. [5]
The goods I buy are always fine, [6] and my buyers never sue.
I hardly need a lawyer — yes, my life's perfection true!

Because we have that C-I-S-G.
There's no risk in international sales far as the eye can see.
But I just received a shipment, so I must quickly say goodbye —
'Cause German courts give me just 5 minutes to inspect and notify. [7]

This song was first performed on November 4, 2005, before a dinner meeting of panelists at the Symposium in Pittsburgh, Pennsylvania, U.S.A., celebrating the 25th Anniversary of the CISG and entitled "The CISG and the Business Lawyer: The UNCITRAL Digest as a Contract Drafting Tool." The Symposium was sponsored by UNCITRAL and the University of Pittsburgh Center for International Legal Education. To those in attendance at that dinner, the song writer/lead vocalist reiterates his deep apologies for his imposition — but the wine helped us all get through it.

2. Uniform Commercial Code, a compendium of statutes forming the main body of domestic U.S. commercial law. Article 2 of the UCC is the domestic U.S. law governing sales of goods in all U.S. states except Louisiana. See 1Uniform Laws Annotated: Uniform Commercial Code § § 1-101 to 2-210 with Annotations From State and Federal Courts, 2003 Cumulative Annual Pocket Part at 1-2 (Thomson West, 2005). An extremely unfortunate strand of U.S. case law applying the CISG asserts that cases interpreting Article 2 of the UCC can be used as guides to the interpretation of the CISG. See, e.g. Raw Materials Inc. v. Manfred Forberich GmbH, 2004 WL 1535839 (U.S. District Court for the Northern District of Illinois, July 7, 2004). For a sampling of scholarly analysis, see The Evolution (and Devolution) of the Methodology of Interpretation, in Quo Vadis CISG: Celebrating the 25th Anniversary of the United Nations Convention on Contracts for the International Sale of Goods (Franco Ferrari, ed., Sellier European Law Publishers, 2005); Joseph Lookofsky & Harry Flechtner, Nominating Manfred Forberich: The Worst CISG Decision in 25 Years? 9 The Vindobona Journal of International Commercial Law and Arbitration 199 (2005).

4. France is a Contracting State to the CISG. See World Wide Web site of the United Nations Commission on International Trade Law ("UNCITRAL"), UNCITRAL Texts and Status, 1980 — United Nations Convention on Contracts for the International Sale of Goods (CISG), Status (table showing information on signature, ratification, and reservations by States), http://www.uncitral.org/uncitral/en/uncitral_texts/sale_goods/1980CISG_status.html (visited December 19, 2005) [hereinafter "UNCITRAL Status Table on the CISG"}. Thus a sales transaction between a party located in the U.S. (as the speaker of the song appears to be) and a party located in Arles would, under Article 1(1)(a) of the CISG, be governed by the Convention (unless the parties effectively agreed to opt out of the CISG in favor of some other legal regime).

6. In which case, the speaker need not invoke its rights as a buyer under CISG Article 35.

7. Artistic exaggeration — but see, e.g., Oberlandesgericht MÃ¼nchen, Germany, 8 February 1995 CLOUT case No. 167 (indicating that eight days after delivery would normally be the deadline for the buyer to give notice of lack of conformity in durable, non-seasonal goods). For some whining about this aspect of German CISG jurisprudence, see Harry M. Flechtner, Buyer's Obligation to Give Notice of Lack of Conformity (Articles 38, 39, 40 and 44), in The Draft UNCITRAL Digest and Beyond: Cases, Analysis and Unresolved Issues in the U.N. Sales Convention 377 (Franco Ferrari, Harry Flechtner and Ronald A. Brand, eds., Sellier European Law Publishers, 2004) also published as Volume I of the CILE Studies series.