Several common themes emerged from the student responses to the focused interventions. The students told us that sometimes they felt uncertain about whether they were smart enough or whether they belonged in law school. They were surprised to realize that most of their peers felt the same way at some point during the year.

Below are sample student responses and advice about attending law school. 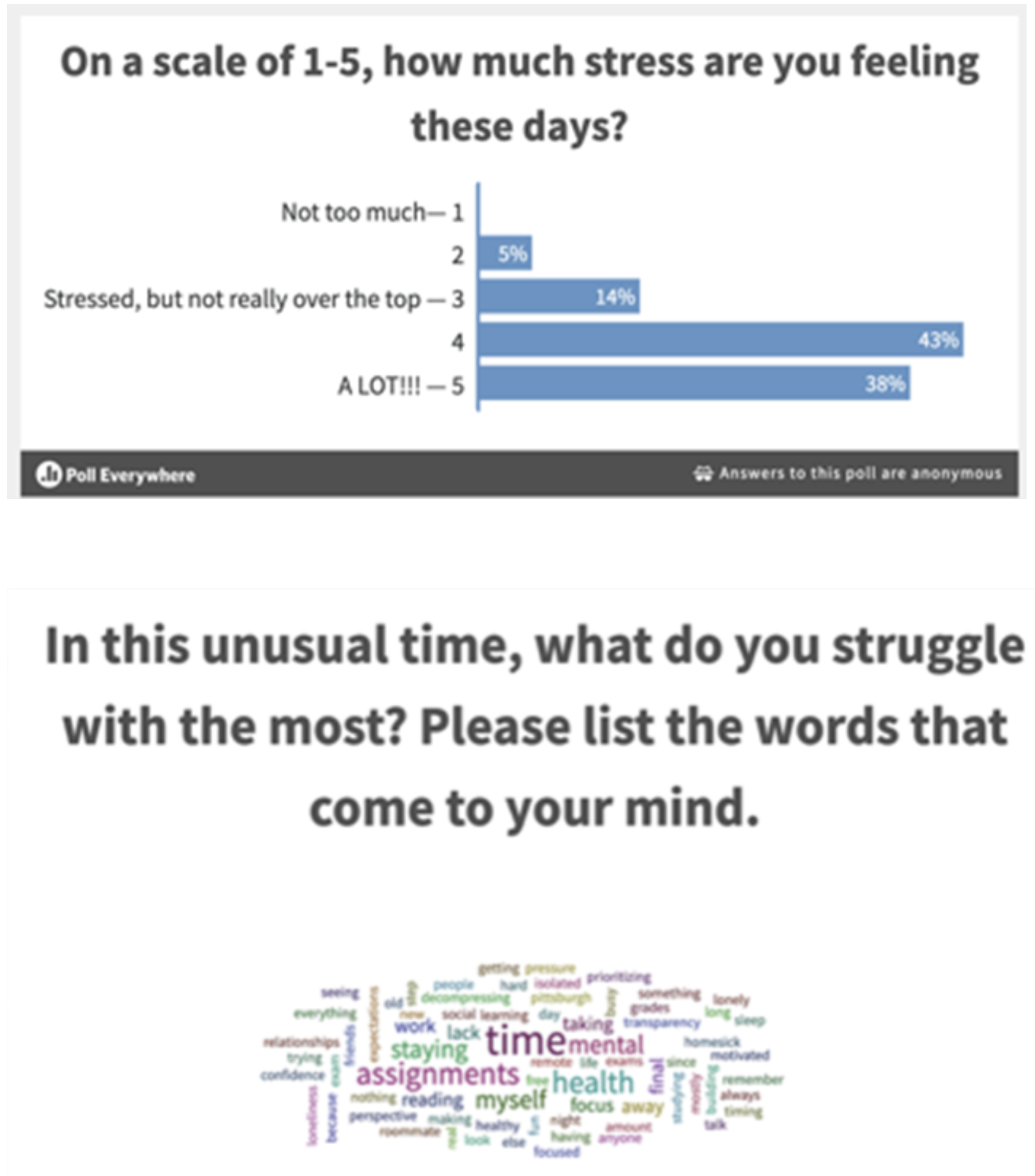 What advice would you give to a friend thinking about going to law school in these circumstances? (Note that this year the pandemic and online teaching were on all of our minds but most of the concerns expressed would also apply in a non-pandemic year and would vary slightly in other years).

“If I were to give advice to a friend about law school during a pandemic, I would say to go for it. I think that the benefits outweigh the negatives. I miss seeing people, but I still had the opportunity to make friends and make some connections. I think that this pandemic will bring people closer together. We will create a lasting bond about the special struggles we have had to go through during our first year of law school. I think it takes a strong person, but it is completely manageable.”

“Don’t stress about what everyone else is doing- everyone has their own approach to law school and it may seem like you aren’t doing enough when you compare yourself to others. But, they might just have something that works for them that wouldn’t work for you. Try to forge your own path in law school instead of following in the footsteps of others.”

“I would tell my friend to make sure that law school is absolutely what he or she wants to do. Then, I would recommend that she keep her reason why she wants to be in law school always in her mind and go back to that when she is feeling discouraged. Finally, I would advise her to think about her support system and find one or two people to really rely on while navigating a hard thing (law school) in a hard time (global pandemic).”

“The advice I would give to a friend thinking about going to law school in these circumstances would be, it’s going to be hard. You already know it’s going to be hard, but maybe not for the reasons you think it is. Yes the content is going to be a lot to keep up with, yes, you’re going to get cold called, and yes, it’s going to be so much work. But beyond that, there are struggles you won’t expect. You definitely will experience “imposter syndrome” or feeling like you don’t belong. It’s going to be lonely without the normalcy of being able to bond with your classmates in and outside of classes. And your mental health will definitely take some hits. But there is also good to be found in all these struggles. Professors are always so happy to talk, they truly want to learn more about what makes you, you! All of your classmates are in the same boat, so you find a way to bond through all of this. I always say that even in the most difficult times, there is always something rewarding to learn about oneself, and I think through all of this I know more about myself than ever. Practically speaking, I would be sure to tell them to form a support system early, whether it’s their friend or family, one is very helpful amongst the rigors of law school. There are bright lights at the end of the tunnel, and this is all a part of the journey.”

“One piece of advice I would give to a friend who is about to start law school during the pandemic is that it will be less awkward after the first two weeks. For me, it took two full weeks to feel settled on Zoom. I’m not a particularly tech-y person by nature, so just navigating through Zoom was kind of hard at first. I worried about what to wear, how I sounded, whether to keep my camera off or on. I realized that almost everybody else was feeling the same way, and that nobody was judging my Zoom presence. Another piece of advice I’d give to a friend is to use your professors’ and your TA’s office hours as much as you want. The TA’s have been so friendly and kind, and they seem excited to talk to me. The material is all still new, and in a big, virtual classroom it’s hard to feel heard sometimes. They’ve taken the time to slow down to my learning pace and have been so patient and helpful. One final piece of advice I’d give is to not be afraid to message your classmates to say hello. I have messaged a few people saying something like “This may sound silly, but you seem really kind in class and like someone I’d like to be friends with.” It actually works! I have met a few people for a socially distanced meal, and they are just as eager as I am to make new friends. People will surprise you!”